I specialize in repairing knives with chipped edges and broken tips.

Regardless of the repair, it is a joy to bring these tools back to full, safe function again.

My ability to work on pocket or folding knives is very limited due to the fact it is not very practical for me to replace any of the moving parts or springs.  But usually most blade repair work I can tackle, short of replacing the blade itself.

Here is a non-exhaustive list of the types of repairs, detailing and/or alterations, I offer:

Below are a few selected examples of repairs I have completed for clients.

This Schrade trapper pocket knife had a broken tip.  With the tip reground and some small rust spots removed, this pocket knife was back in service again.

er pocket knife with a broken tip, this time a Camillus lock back,with a very nice wooden handle.  Soon it was almost good as new.

This Benchmade  9100 Auto folder was very special to the client, who had earned it while on the job.  It had been her daily companion until its tip got broken.  She wasn’t sure it was repairable but I got it taken care of and she was very happy to have a functional companion again.

of the tip of this Gerber Gator pocket knife was broken off.  An early attempt to repair it was evident.  I came up with a repair that returned it to functionality, although it looks a little runty now…the client was very happy to have a working knife again.

edge; a rather large section had been broken out.  After regrinding the primary bevel and giving it a satin finish, it was back in service again.

An older Gyuto with subtle but significant damage to the edge.  Numerous small chips along the edge made the knife less functional.

The chips were small enough that I had to remove minimal metal to make it usable again.  This way I was able to preserve the wonderful old patina on the blade.

This is a very typical repair. A client brings

me a Chef’s knife with the last inch or so broken off and I repair the tip so the knife will have a point again. Many kitchen knives from Japan have a tip profile identical to this, so it I think it works well aesthetically; at least better than looking at a broken tip.

Sometimes, if only a small portion of the tip is broken off, I can regrind it so the knife has the same profile it had when it was new, only slightly shorter.

A common repair, replacing handle slabs. This particular Wustof Trident chef’s knife has a 16” blade on it (yea, it is a big one) and was used by a pizza maker for cutting pizzas. The slabs had cracked and split and needed to be replaced. The new slabs are straight-grain cocobolo. I was told by a knife purveyor that only 100 of these particular blades were ever made.

An early Ka bar fighting utility with a broken tip.  Note the full flat ground blade, very different then the current ones.  The current saber-ground models don’t cut nearly as well as this older one does, due to the primary bevel angle, but that also made the older ones more likely to break at the tip since they were thinner.  Once I finished the regrind I re-blued the blade to match it’s original appearance.

A nice older Randall which had suffered some unfortunate accident. This project was a bit of a challenge since a good p

ortion of the tip was missing and there were several angles and curves to bring together. The client wanted a light patina added to the blade for a margin of protection.  I really enjoyed this project; a beautiful older knife that was a ch

This knife (a Cold Steel SRK) was presented to a client when he was in the National Guard. While hunting he killed a blacktailed deer and when butchering it proceeded to use this knife to try and break the pelvic bone. I don’t recall if he got through the bone, but it did a number on the edge of the knife. A small portion of the tip was also broken off. So I reground the bevels on each side with a slight convex grind, just in case he wanted to hack up anything else, and fixed the tip. The sad thing is, the next fall he was hunting with this knife and lost it in a brushy creekbed. I tried to get him to tell me where it was so I could go look for it.

This is an old Buck Special that the client had broken the tip off of and then tried to regrind it himself. There were also a few large chips in the edge and many scratches on the blade. I wasn’t sure I would be able to make this one work, but it came out looking pretty good. There were a lot of different angles to get right.

Can I visit your shop?
Do you have detailed drawings or CAD drawings of the tools on your site?
Do you offer a “rush” option?
How do I pay for the work you did?
How long does it take to get a knife repaired or sharpened?
How should I package my knife to ship it to you?
I have a knife I would like repaired. What do I do first?
I just got my knives back from sharpening; anything I should know?
I like one of the jigs you show on the site. Do you have one I could buy?
My knife’s blade broke off near the handle, can you fix it?
The spring/lock on my folding knife broke; can you fix it?
Where do I ship my knife to?
Will you make a sheath for my knife? 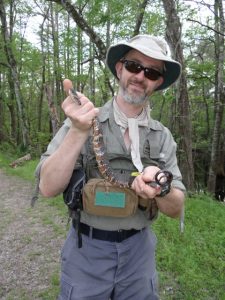 I work full-time as a wildlife biologist and have a small homestead with my family outside Albany. More about me.